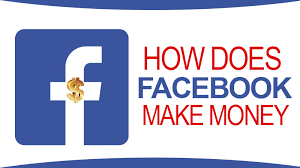 Facebook basically earns money by selling spaces for advertisement on different media places. This may include websites and applications that enable users to connect with other people.

The company owns the websites and applications including the social website Facebook, Photo and Video sharing app Instagram and the chat applications Messenger and WhatsApp. Facebook also provides a system that allow users to connect through its Oculus virtual reality (VR) products.

Facebook has competition with other companies that sell advertising spaces on the market. It also competes with the companies that allow users to share content. The most famous of them are Apple, YouTube, Tencent Music Entertainment Group and Amazon.

The are different types of adds that are categorized by Facebook. It’s types are

Facebook live has made easy to the users to connect them via video. This feature enables the user to check in with others user thousand miles away. Users are also using this feature heavily. Facebook sees that it is the effective manner to connect advertisers and user to each other. Broadcasting live is trending. Facebook started videos ads on its signature video platform commonplace.

Facebook earns more than 80% of its revenue from ads but advertisements are not the only tool to generate money for Facebook. Data generation is also a tool of earning for Facebook. Although a recent Cambridge Analytica scandal may have effected its generation of revenue.

While it is estimated that Facebook earns $27 from the user of European countries and $84 from each of its north american user.From the Us Canadian market $81 is generated. and 3% of the revenue is earned from user based data generation and business payments